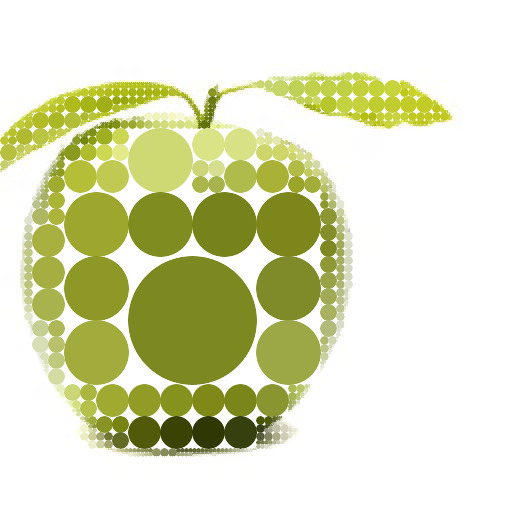 Above is a generated image I made from a picture of an an apple I found on freepik.com by kstudio. The original looks like this: 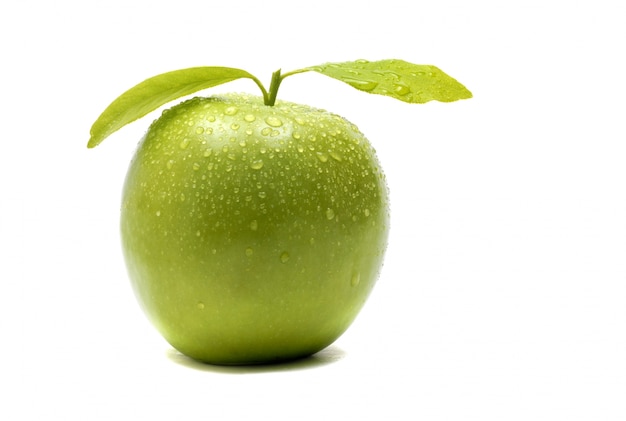 My algorithm essentially continues to divide the image up into quadrants only if the standard deviation of colors is too high.

To illustrate the algorithm working, I implemented a max-recursion feature to QuadArt, created 10 different images of different recursion depths using this shell command: for i in {1..10}; do ./quadart.py apple.jpg -o r-out/apple-r$i.jpg -m $i --thresh 25; done, and then I generated the PNG using ImageMagick through the command convert -delay 40 -loop 0 *.jpg apple-r.gif. The GIF is below, showing quadart magic in action.

Even though my program QuadArt takes up 181 lines of code, the actual recursive algorithm used for generating the QuadArt can be described in only 8 lines

The above algorithm is pulled directly from my code. class QuadArt is the class holding the imageio image data, wand drawing canvas, and the standard deviation threshold. x, y, w, h, are passed into the function to specify the x,y location of the top-left corner of the currently-being-analyzed sub-image, along with it's width and height.

Originally, I implemented the entire QuadArt program using the Python Wand module, which uses ImageMagick under the hood. This library renders circles beautifully. After coding through my first pass of implementing the quad-tree based photo filter, I ran into an issue where the code was taking way too long to process. As it turns out, having Wand check the color of every single pixel takes way too long for calculating standard deviation, and Wand had no built-in feature for performing this kind of analysis. Also, it's difficult for me to tell whether my code is stuck when nothing is being displayed to the screen.

This loading bar GIF was generated using Byzanz with the help of xwininfo.

loading_bar() has logic to calculate progress only while depth<=3, but I still needed to check if the current self.recurse_depth is equal to 3 in the 1st exit point of recursive_draw() or else there will be redundant calls to loading_bar() due to the recursion.

For monitoring your own recursive function, you can easily stick this at the top of your python code, modify recursion_spread to be how many times the function calls itself every time it recurses, and then call loading_bar() from all your recursive function's end-points, making sure it's only called once per branch of recursion.

Image analysis with imageio and numpy

For the threshold of recursive_draw() on whether to split out into more quadrants, the function too_many_colors() calculates the standard deviation of red, green, and blue, and returns True if the standard deviation passes a threshold. For QuadArt generation, I find a nice threshold is about 25 STD or else the image becomes either too pixelated or too fine-grain. The python image-analysis library imageio is perfect for this kind of analysis since it plugs right into numpy for fast statistic calculations.

My initial setup for image analysis via imageio and numpy is as follows:

This is how my program QuadArt calculates whether the recursive_draw() function sould recurse further due to a high color deviation. Take a look at too_many_colors()

The above function does this:

Now to the easy part: displaying circles in wand.

My strategy for performing the image filter is to build the resulting image from a blank canvas.

This is a template for how to draw things using Wand

The aspect-ratio of the resulting canvas for QuadArt is always square so that way QuadArt’s recursive algorithm can split the image evenly into quadrants. By default I use output_size=512 since 512 is a power of 2, and can be continuously split in half into more quadrants without loosing resolution.

However the size of the input-image can vary. In order to account for this I divide the desired outptu size by the width of the cropped input image like so:

The function I used above in recursive_draw() is draw_avg(). This is a simple function that computes the average color of an input image within a boundary, and then draws a circle within a box (or a square if the user prefers).

The function get_color() first grabs a cropped section of the input image (in imageio format), and then computes the averages of red, green, and blue within that cropped section, and then creates a wand.color.Color object based on the computed average colors.

The function draw_in_box() draws either a circle or a square within a defined box, which is the quadrant that was calculated earlier by the too_many_colors() to have a low enough deviation. Before drawing to the canvas, the coordinates along with width and height are multiplied by output_scale. And the fill color of wand.drawing is set to the previously calculated average color. Then the circle or square is drawn to the canvas.

There you have it! This is how I implemented the Quadtree Photo Stylizer, and how you can implement the same, or be inspired and create your own algorithm for stylizing your photos.

You can view the entire code here: github.com/ribab/quadart/blob/master/quadart.py